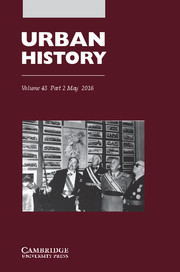 The articles gathered here aim at outlining a complex view of the relationship between cities in a state of ‘crisis’ and changes to policing systems, in a period marked by rapid urbanization and industrialization. They explore the connections between the rhythms of urban change and the changes in the institutions responsible for policing the city. This introduction defines ‘urban crisis’ as a brief paroxysm and a way of describing rapid urban change that is considered problematic especially in terms of social control. It examines three sets of issues to highlight the relationships between policing powers and urban dynamics: first, how the police managed to handle unforeseen, traumatic events in emergency situations; second, how the police forces tried to legitimize their status through their understanding and control of urban dynamics; and third, how the police used the discourse of urban crisis they helped to produce, as a tool for their own ends.